Docker & the Rise of MicroServices

Are you a software engineer/developer/coder or maybe even a tech enthusiast who has been hearing of terms like Microservices and Docker but still clueless as to why there is so much hype around it?

If yes, this is a must-read for you!

A little bit of "History"

In the early 2000's, we witnessed the rise of Service Oriented Architecture (SOA), a popular design paradigm for building software. In simple words, SOA is a software architecture pattern that allows us to construct large-scale enterprise applications that generally require us to integrate multiple services, each of which is made over different platforms and languages through a common communication mechanism.

Here is a simple pictorial representation of the Service Oriented Architecture (SOA):

Let's take a look at a case study: an ecommerce store. We know that multiple devices can access most ecommerce sites, so they have various user interfaces for laptop and mobile views.

We also know that multiple operations or services are running with each other to ensure the regular functioning of your ecommerce applications. Some of these services are account creation, displaying product catalog, building and validating your shopping cart, generating bill, order confirmation, payment mechanism and so on.

In a monolithic application, all these services run under a single application layer so the ecommerce software architecture would look like this: 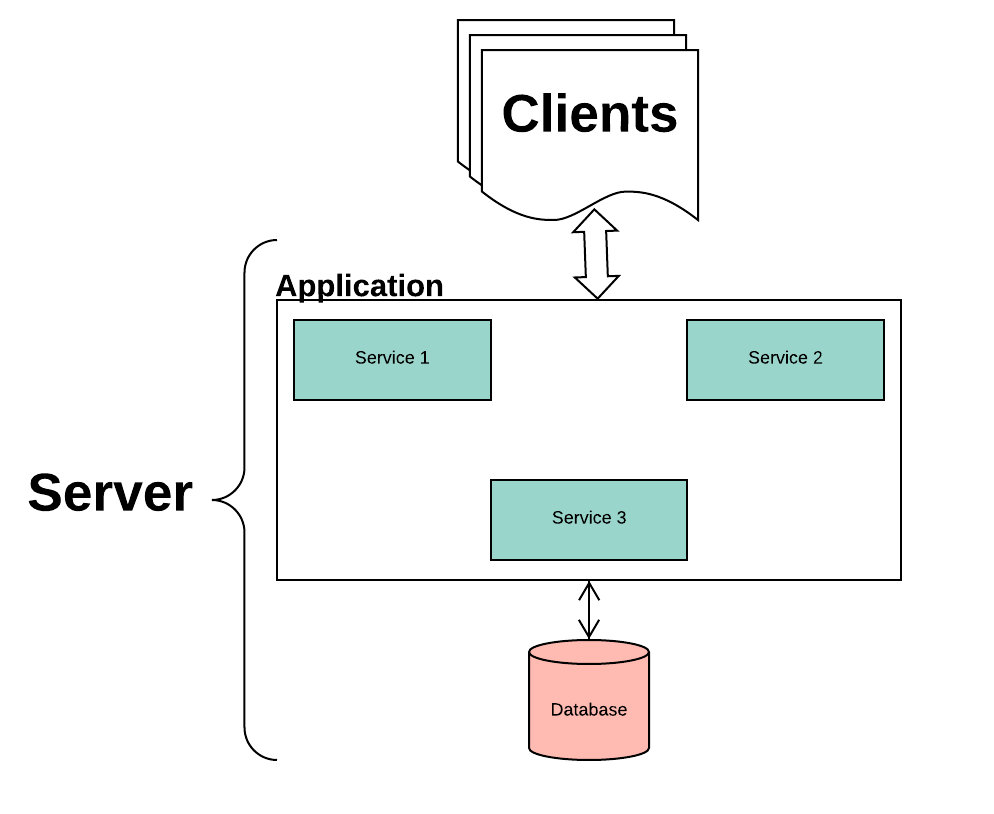 "Microservices" to the rescue!

Microservice architecture can be considered to be a specialization of SOA and an alternative pattern that overcomes the drawbacks of a monolithic architecture.

In this architecture, we focus on modularizing the application by dividing it into smaller standalone services that can be built, deployed, scaled and even maintained independently of other existing services or the application itself as a whole. These independent services are called microservices, hence the name Microservice Architecture.

Alongside, the evolution of software architectural patterns, we have also seen an emergence of some new technologies such as Docker and Kubernetes for supporting our software infrastructures and ensuring efficient management of our scalable products and services. We have evolved from using hardware virtualization to containerization.

Wait, you might be thinking, what does this even mean?

Now, to understand how we have evolved in the IT infrastructure space, let us take the help of the following diagram: 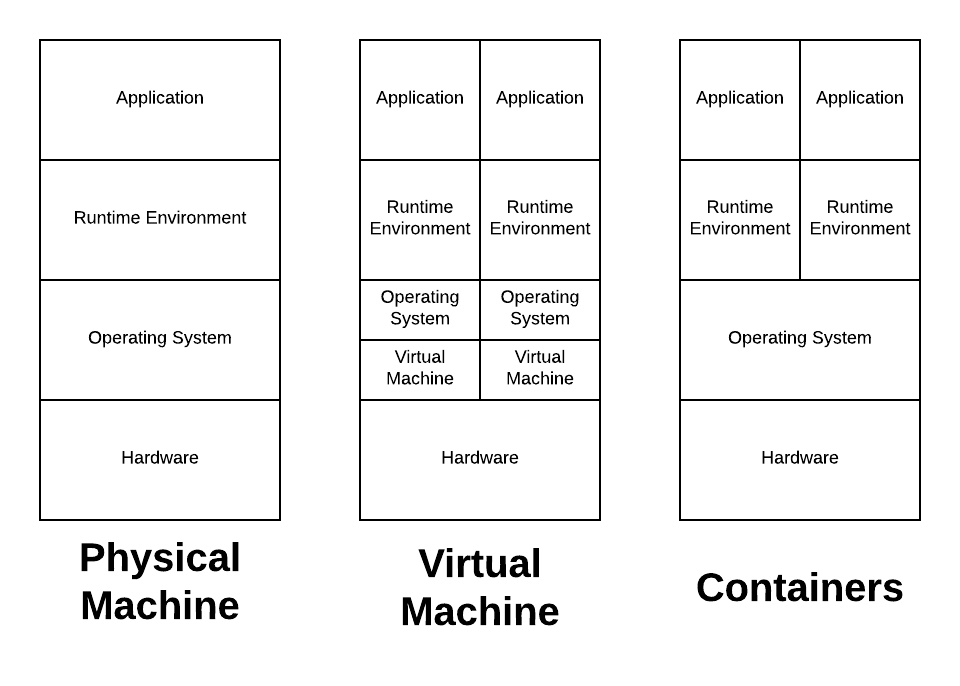 The first picture shows a physical machine or a hardware server. Typically, when we build applications, we use the resources provided by our host OS and the same pattern used to be followed when deploying the application. But what if you want to scale the application? At some point, you might want another hardware server and as the number keeps increasing, so does your cost and other resources like hardware and energy consumptions.

Also, you might be thinking if you require all the resources of your hardware and host OS at the same time for running your application. Not really, so then why such a massive infrastructure?

This has led to the evolution of hardware virtualization for optimizing IT infrastructure setups through what we call today as Virtual Machines (VMs). As you see in the second diagram, VMs have their guest OS which is run over a single physical machine or host OS. This enables us to run multiple applications without needing installing numerous physical machines. The host OS can ensure that there are systematic resource distribution and load balancing between the different VMs running on it.

Although VMs made software more accessible to maintain and drastically reduced costs, more optimization was still possible. For instance, not all applications would behave as expected in a guest OS environment. Additionally, the guest OS would require a lot of resources for even running simple processes.

These problems led to the next innovation: containerization. Unlike virtual machines which were more operating system specific, containers are application specific, making them far lighter. Furthermore, VMs can run multiple processes whereas a container runs as a single process. This leads us to two things:

Now that we understand the evolution of IT software infrastructure, we might want to know how we can achieve things like Microservices Architecture and Containerization that we discussed earlier? A simple answer to this could be, Docker.

Docker is the world's leading software containerization platform. It encapsulates your microservice into what we call as Docker container which can then be independently maintained and deployed. Each of these containers will be responsible for one specific business functionality.

To understand Docker in a little more depth, let us take the same example of an ecommerce website that we discussed earlier. We know that it will have multiple operations and services such as account creation, displaying product catalog, building and validation shopping cart and so on. In a microservice architecture, all these can be treated as microservices and encapsulated in a Docker container. But why would you do that?

One of the reasons would be to ensure consistency between development and production environment. For instance, consider that three developers are working on this application. Each of them having their environments. So one developer might be running Windows OS on his machine, while the second developer could be running Mac OS and the third developer would prefer a Linux based OS. Each of them would take hours of efforts to install the application in their respective development environments and an additional set of efforts to later deploy the same app on the cloud. This is not smooth, and there is a lot of friction to port such applications to cloud infrastructure.

Now that we understand the reasons for all the hype around microservices and docker, our next blog will take you on a deeper dive to how you can use these technologies and build modern, scalable applications with it.

Just a disclaimer: we're a logging company here @ Timber. We'd love it if you tried out our product (it's seriously great!), but that's all we're going to advertise it.

If you're interested in getting our posts in your inbox, feel free to sign up here. We promise there'll be no spam, just great content on a weekly basis.